A Fond Farewell to Our Beautiful Belle 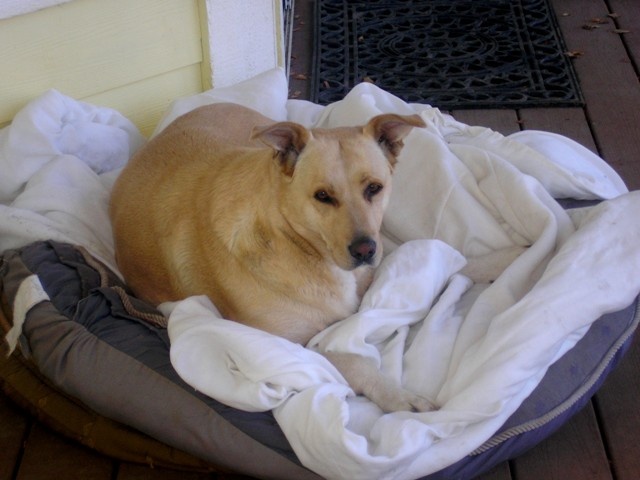 How did Belle become part of our family? Over 10 years ago, as I was driving out to the Ranch, I quickly came to a stop behind a long line of cars. Wondering what the hold up was, I got out of the car and to my surprise it was a dog. This young golden lab mix, looking very lost, was running back and forth between cars as though she was looking for her lost owners. Of course the dog-lover in me called out to her, realizing she would certainly not come to me as I was not her family, but to my surprise, quite the opposite happened. I must have been the voice she was looking for as she quickly looked my direction and into the car she jumped.

Oh Dear, what was I to do? The tail-gate open, in she hopped , and quite happily I must add. This was not the best of evenings as we had a family event to go to and it did not include dogs. A plan was quickly hatched in my mind as I headed to the ranch. This new pup loved the back of the Explorer and there was plenty of room for her so she could stay there as we attended to our family duties. This was the best place for her as our other dogs needed some time to acclimate to a new canine in their midst. We had 3 dogs at the time: Heidi- Alpha Female Rottweiler-Lab mix (not a lover but a hunter), Tigger: loving male drop-off brindle Pit-mix (Man-Dog in charge) and Murphy: Retriever-mix that was interested only in chasing tennis balls.

Now a bit about our Belle. She easily fit into our family from the moment she jumped into the car. Affectionate, loving and never a threat to our existing canine family. As the newbie to the ranch she quickly found her place in the doggie pecking order. That was the bottom of the heap, so to speak. To be honest, I think she was so excited to be with her new family that she happily filled that niche. All the dogs had their role and she did not interfere with them at all. Here job quickly became the official greeter at the ranch. Every night she would greet me at the top of the driveway as only she could. Her eyes were bright, her tail always wagging and she wanted to be the first to welcome me home. She would bark and let the other dogs know mom was home. Once the family is complete it is time to relax.

Belle loved to eat. Plain and simple, no questions asked. She liked food, any food any time of day or night. Now Belle was never the athletic type, that is, unless she spied something in the food category on the counter that she felt she just had to have. There was not a competitive bone in her body except in her effort to commander food. She didn’t exhibit athletic prowess in running, swimming, digging holes, fetching balls except in her never ending quest for anything food. A couple of stories immediately come to mind.

Not long after we got Belle our family decided to go out for dinner. During the day I had made a large pot of soup. I pushed the soup to the back burner of the stove to let it cool. Just to let you know all the pups had been fed and their bellies were full. Doors locked, dogs bedded down (or so we thought!), soup pushed to the back of the stove and off we went. Now the soup was tomato based made with carrots, onions and other veggies. I don’t know about you but that isn’t something I would think dogs would like. But not Belle. Remember I mentioned earlier any food any time. Upon our return we were happily greeted by Belle and the others and all seemed as we left it. But not quite!!! As we entered the kitchen we noticed that the pot of soup no longer sat on the back of the stove but instead in the middle of the kitchen floor. As we made our discovery I’ll have you know Belle did not accompany us into the kitchen. That soup pot was pulled from the stove to the floor and licked spic and span clean. Not only was there no soup left in the pot there was not a drop of soup anywhere on the floor, the walls or the oven door. We couldn’t get angry because we did not witness the crime and it was so perfectly cleaned up we just stood in awe. Though there was no You Tube then this would have been a perfect caught in the act moment. We are sure she pulled it down as the others egged her on and they all quickly shared in the rewards. You may wonder why we implicate Belle as the assault leader of tomato soup caper. Well as time went on we witnessed her remarkable ability to get her large self in positions that we previously thought were impossible in her quest for food. Not only could she get food she could eat faster than any other dog I have ever seen. This leads me to my next memory.

Large loaves of sourdough bread were one of her favorites. During the work day at the ranch sourdough is often left on the counter for slicing for sandwiches during a quick lunch. More than I can count are the times we were left bread-less because we left her in as we headed out to work on the ranch. Imagine questioning yourself when you come in an hour later for another snack and can’t find the bread. “There was bread here wasn’t there?” There she would be sound asleep with a belly full of our sourdough. There were several times we caught her in the act of stealing bread. She didn’t drop it, oh no, she gobbled down as much of the loaf as was possible before we took it away from her.

As Belle aged she became diabetic or perhaps was diabetic but we did not recognize it. I’d heard stories of people giving their dogs insulin and I told myself, “Not me, never”. Well never say never because she received insulin 2 times a day for several years. Her diabetes was quite brittle but she was a champ. She never got used to the shots but we made a bit of food a reward as we developed a routine each morning and evening. She lost her vision but never lost her enthusiasm. Because she was such a nice dog she seemed to take the blindness in stride. She knew her way around the ranch so well, the blindness did not impact here ability to continue here greeting duties.

We miss our beloved Belle the Greeter. As I look out my office window I see where she has joined her friends Heidi and Tigger. She can now have an endless supply of sourdough bread in dogie heaven. I miss her happy bark her bright eyes and enthusiastic smile as I come down the driveway after work.

Good buy my Belle. We love you and miss you. Thank you for making our lives happier. You filled a spot in our hearts that is now a little bit empty but you have given us laughter and good humor as we tell the many Belle stories that bring joy to each of us.

Jammin’ in a New Direction

Change is inevitable and when you run a small business...

The season of Autumn has arrived and it is ever...

This site uses Akismet to reduce spam. Learn how your comment data is processed.